Home > Uncategorized > Mystery of Albino Redwoods May Have Been Unlocked 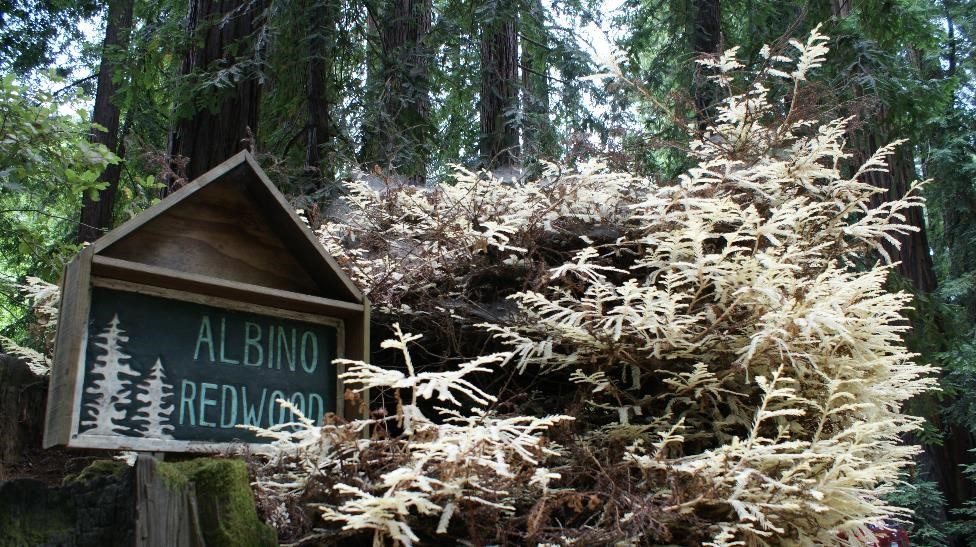 Mystery of Albino Redwoods May Have Been Unlocked

This article was written by By Paul Rogers, Bay Area News Group. We thought it was well worth passing along.  Enjoy!
— Russell Akiyama

For 150 years, they’ve been a mystery: white trees in the middle of deep green California redwood forests.

Scientists know that albino redwoods are genetic mutations that attach themselves to the roots and branches of normal redwood trees and live by drawing sugars off the huge host trees. There are roughly 400 in California, with Santa Cruz County having more than any other area. Locations in many places are kept secret to keep poachers and souvenir hunters away.

Now a San Jose researcher is showing that these “ghosts of the forest” may be more than a biological novelty, perhaps solving a generations-old question.

Zane Moore, a doctoral student at UC Davis, analyzed the needles of albino redwood leaves in a lab and found that they contain high levels of the toxic heavy metals nickel, copper and cadmium.

The phantom-like plants, which rarely grow more than 10 feet tall, appear to be drawing away and storing pollution, some of it occurring naturally in the soils — particularly shale soils — and some left from railroads, highways and other man-made sources that otherwise could degrade or kill redwoods.

“They are basically poisoning themselves,” he said. “They are like a liver or kidney that is filtering toxins.”

Moore, who also plans to test the albino leaves for lead, mercury and other compounds, has worked with arborist Tom Stapleton of Amador County to carefully catalog the locations of albino redwoods across the natural range of redwood forests, which stretches about 400 miles from the Oregon border to Big Sur. Some albino redwoods also exist outside the range, where redwoods have been planted by people. There are numerous examples in the Central Valley, even one in Seattle.

Moore’s research will be included this week at the annual Coast Redwood Science Symposium in Eureka.

“The results are fascinating,” said Emily Burns, director of science at Save the Redwoods League in San Francisco. “Albino redwoods are parasites, and if these sprouts have some sort of a function, that’s really cool.”

Additional research is needed, she said, to answer other key questions such as, “Why aren’t there more albino redwoods?”

Albino redwoods were first documented in 1866, when one was found near San Rafael and taken to the California Academy of Sciences in San Francisco, where researchers couldn’t figure out why its waxy leaves were white. Later investigation found that the plants, which grow out of original, healthy redwoods, are white because of a genetic mutation that leaves them without chlorophyll, the pigment that makes plants green. It’s also critical for photosynthesis, the process by which plants use the energy in sunlight to turn water and carbon dioxide into food.

But until recently, they were always thought to have been freeloaders, taking from the big trees and contributing nothing.

Dave Kuty, a retired Apple engineer who lives in Felton and works as a docent at Henry Cowell Redwoods State Park, said the easiest way to see an albino redwood is to hike the park’s loop trail near its headquarters and look for Marker 14, where an 8-foot-tall albino redwood is growing.

As the oddities have gained a following on the internet, he said, he has been less inclined to broadcast widely where the 10 others in the park are located. That’s in part to keep people from hiking off trails to find them — and also to protect the rare plants.

“Sometimes people who own them report people climbing over fences to take samples,” Kuty said. “I used to tell everyone where they were in the park, and then I’d find pieces of albino on the ground. Ever since then I’ve been reluctant.”

Kuty, who has helped Moore with his research, said many questions remain unanswered about the mysterious plants.

“Maybe the albinos are acting like a sponge — to get the bad stuff out of the soil and the plants,” he said. “That’s a possibility, but we need to do more research.”

Some are pure white. Others are yellowish. Some “chimeras” even have leaves that are half green and half white, Kuty said.

In theory, Moore said, albino redwoods could be cloned, then planted, and potentially used to clean up toxic waste sites. In the meantime, the research continues.

“There’s nothing like walking through the forest and seeing bright white leaves,” said Burns, of Save the Redwoods League. “People have wondered about them for a long time.”