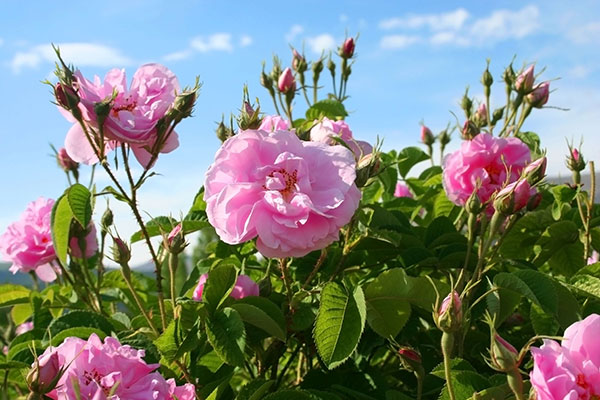 Who doesn’t love to learn neat facts about the things that interest us? Since summer is finally hitting Southern California and time is running out for getting roses into the ground before the heat really kicks in, we thought it would be an appropriate time to dive deep into facts about roses. We found these facts on Flowerweb.com

1.  Nikita K. Rulhoksoffski from San Onofre California bred what has come to be known as the largest rose ever. The rose was pink in color and measured approximately 33 inches in diameter. The world’s largest rosebush is a white Lady Banksia located in Tombstone, Arizona. The rose bush spreads over an arbor that covers over 9,000 square feet.

2. The world’s oldest living rose is believed to be 1,000 years old. It grows on the wall of the Cathedral of Hildesheim in Germany and its presence is documented since A.D. 815. According to the legend, the rosebush symbolizes the prosperity of the city of Hildesheim; as long as it flourishes, Hildesheim will not decline. In 1945 allied bombers destroyed the cathedral, yet the bush survived. Its roots remained intact beneath the debris, and soon the bush was growing strong again.

4. Out of all colors, there are no black roses. What might sometimes be referred to as a black rose is actually a dark red rose. A good example is “The Black Rose of Turkey”, is a breed that appears pitch-black to the eye, but is actually has a dark reddish-crimson color.

5. Roses can grow quite tall. The tallest ever recorded rose bush stands at over 23 feet (7 metres) tall.

7. The rose also grows into a fruit. The fruit is called a Rose Hip. It is shaped like a berry and most are red in color but you can find black and dark purple versions.

8. The rose hip of some rose species are known to be full of vitamin C. This is why the rose hip is sometimes used to create jam, jelly & marmalade. The hip also has minor medicinal uses, used in food supplements and can be pressed or filtered to make rose hip syrup.

9. Ancient Romans used roses as room decorations, and sometimes wore the flower as a necklace. It was also believed in Roman circles that anything said “under the rose” was deemed to be top secret.

10. Roses can live for a very long time. There are rose fossils discovered that date back 35 million years. The large rose bush that covers the wall of the Cathedral of Hildesheim in Germany has been there for over a millennium.

11. Back in 2002 a miniature rose, named “Overnight Scentsation”, was taken to space to assist in studies that aimed to show effects of low gravity on the smell of roses. The study also aimed at learning how to improve the fragrances of a number of consumer products.

12. Cavriglia in Italy is the largest private rose garden in the world, having over 7,500 different varieties of roses.

13. The buds of the tiniest roses are the size of a grain of rice.

14. The rose is one among the only three flowers mentioned in the Bible. The others are lilies and camphire (henna).

15. Since ancient days, the rose has been known as the ultimate symbol of love. The rose is also associated with sympathy or sorrow.

Don't miss out. Subscribe today.
×
×
Valued Customers - We are here to serve you!See How